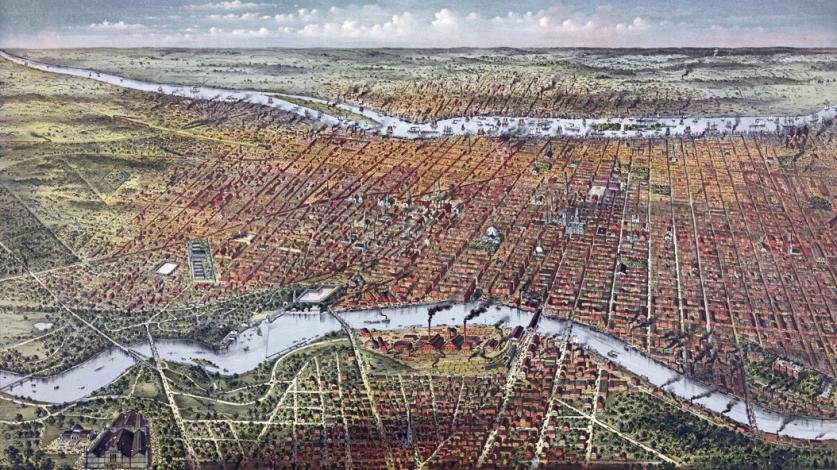 With the publication of A Portraiture of the City of Philadelphia in the Province of Pennsylvania in America, prepared by Thomas Holme for William Penn in 1683, a forward-thinking, precedent-setting design for city shaping in America was created. The first European colonists to the region were Dutch, who settled the Delaware River valley in the 1620s, followed by Swedes and Finns in 1638. The English assumed control of the region in the 1660s and Penn was granted a royal charter for the Pennsylvania Colony in 1681. A year later, Penn—according to legend—signed a treaty with the Leni Lenape indigenous peoples beneath a grove of elms, an event that would be portrayed dramatically in art and come to symbolize both American diplomacy and the picturesque American landscape. 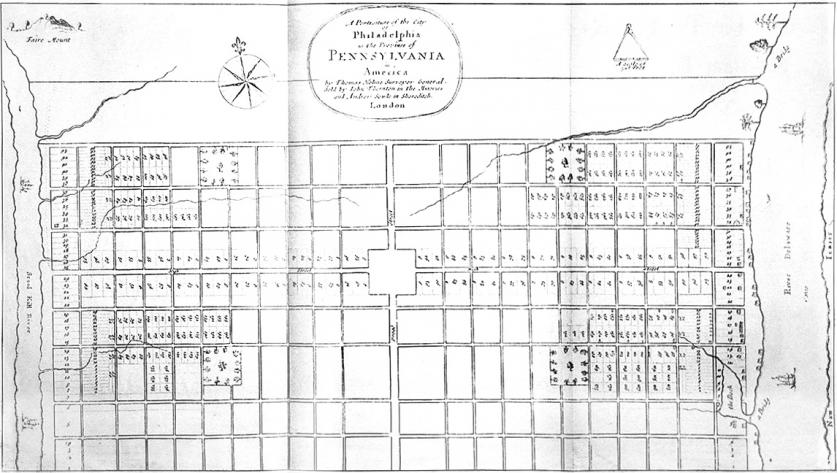 A Portraiture of the City of Philadelphia in the Province of Pennsylvania in America, 1683, Thomas Holme and William Penn

Situated on a 1,200-acre flat plain between the Schuylkill and Delaware Rivers, the city laid out by Holme and Penn comprised a grid of streets subdivided into four sections. According to the plan, each of the quadrants would include a centralized eight-acre landscaped square that would serve as common space for Philadelphia’s residents. These public squares were interconnected by avenues that were named for native trees, such as mulberry, locust, sassafras, and walnut. At the center of the four sections, a fifth square (ten acres) was designated. These common areas were used for livestock grazing, wood collection, and trash disposal. The easternmost squares became potters’ fields used for the burials of strangers, soldiers of the Revolution who died of disease and injuries, and African Americans.

By the 1750s, Philadelphia was the largest city in the English colonies, with almost 20,000 residents. Despite that fact, the landscape was still fairly wooded and rural. City streets were unpaved and profusely littered, with no method for overseeing public works in place until 1762, when Benjamin Franklin established a commission to manage sewers and streets. This system was democratized in 1789 with the passage of a city charter that created an elected council and an alderman system for the administration of public works. 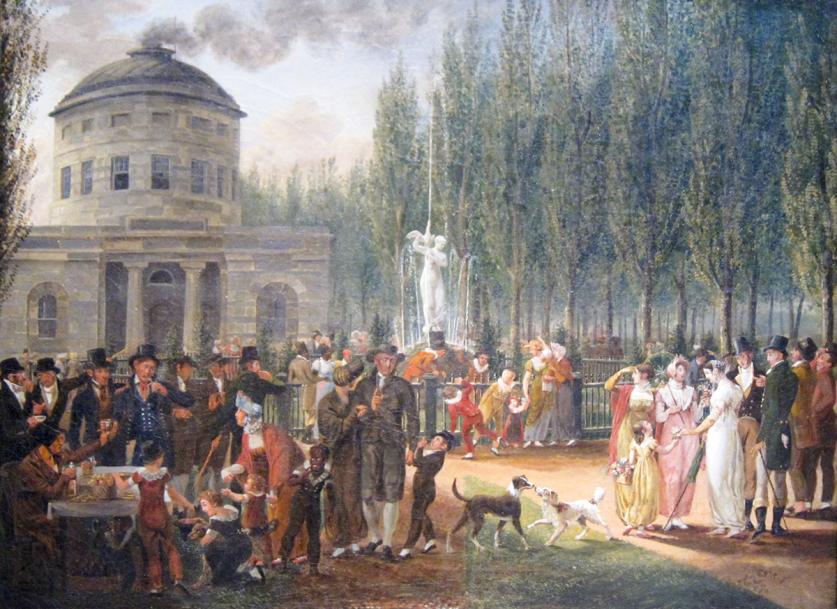 Built between 1732 and 1751 in the eastern part of the city, the State House would serve as the setting for the convening of the Continental Congresses in 1775, the public reading of the Declaration of Independence in 1776, and the signing of the Constitution in 1787. Adjacent to the State House, a public garden was laid out in 1784. It featured groves of elms and hollies, benches, a promenade, serpentine walks, and constructed landforms. Within a decade, the federal government was relocated to Washington, D.C. This move obligated Philadelphians to rethink the design of their city and resulted in a revived interest in the Portraiture, which had gone largely unrealized.

Epidemics of yellow fever in 1793 and 1794 led to a greater understanding of the necessity of clean drinking water. In 1801, Henry Latrobe’s pump house, constructed in the town’s central square (then called Centre Square), was activated. Latrobe’s invention pulled water from the Schuylkill River and deposited it in reservoirs. The square became a park-like environment with ample space for public gatherings framed by bosques of poplar trees and ornamented with a fountain and allegorical sculpture by William Rush. Water mains were installed from the pump house to outlying areas, thus demarcating commercial and residential zones. The pump house and reservoirs were soon overwhelmed by the expanding city and, by 1815, they were abandoned, rendered obsolete by the new Water Works and reservoirs designed by Frederick Graff on the banks of the Schuylkill. Within a decade, the industrial Works—housed in Palladian structures—were ornamented with parterres, promenades, fountains, sculpture (again by Rush), and gardens that would serve as the nucleus of Fairmount Park.

In 1825, the city council passed a bill to officially name the squares for historical figures. The central one was named for William Penn and the others for George Washington, Benjamin Franklin, James Logan (Penn’s secretary), and David Rittenhouse (astronomer, surveyor, and first director of the U.S. Mint). By the middle of the century, each of the squares had been improved with landscape features such as fences, fountains, radial walks, planting beds, canopy trees, and lawns. A cholera outbreak in 1832 led to an improvement of burial practices and the advent of rural, park-like cemeteries such as Laurel Hill, established in 1836 and designed by John Notman. 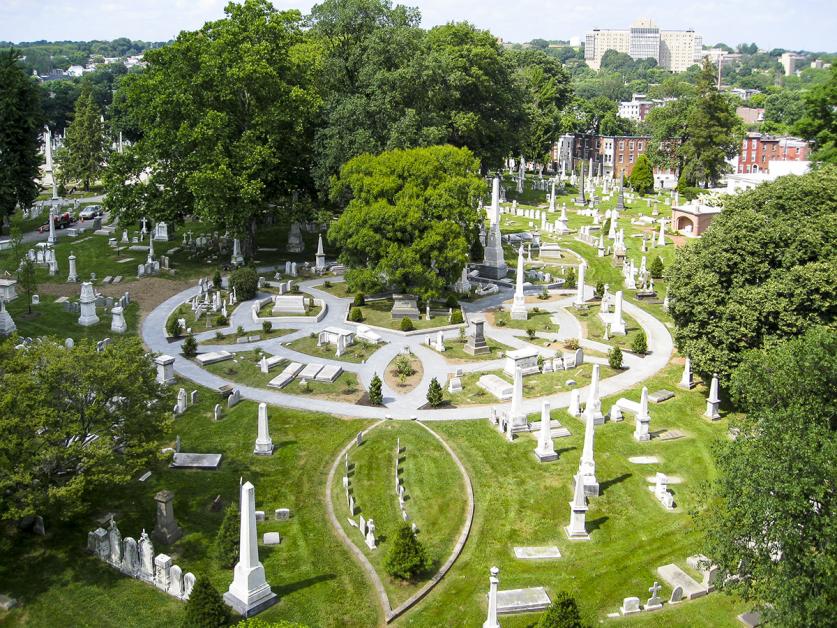 In 1854, with the population of the city and its surrounding boroughs swelling beyond 400,000 people, the Act of Consolidation aggregated the public services of Philadelphia. With the passage of the act, the two-square-mile city expanded to encompass a 130-square-mile area. A year later, the city acquired private estates such as Lemon Hill, Sedgeley, and Landsdowne on the Schuylkill and transformed the properties into Fairmount Park, serving the dual purpose of protecting the city’s water supply and providing publicly accessible recreational space. Within a decade, the park, lying on both sides of the river, encompassed 2,800 acres and the Fairmount Park Commission was established in 1867 to preserve and protect Philadelphia’s open spaces. In 1871, Congress created the Centennial Commission to plan for the Centennial International Exhibition of 1876, which, falling on the 100th anniversary of the signing of the Declaration of Independence, would be the first world’s fair held in the United States. Fairmount Park was selected for the fair and 450 acres were transformed by Hermann Schwarzmann to accommodate the construction of 200 buildings and neatly landscaped grounds.

Meanwhile, Philadelphia had grown into a metropolis. Hundreds of thousands of immigrants arrived in the city, attracted to work in industrial textile mills and factories associated with ship and locomotive building. Penn Square (formerly the central square) had become the setting of Philadelphia’s civic government when the massive Second Empire-style City Hall was completed in 1901. A diagonal parkway, designed in 1917 by Jacques Gréber and completed in 1929, drew upon City Beautiful concepts to create a Beaux-Arts linkage from City Hall, passing through Logan Square (the northwestern of the five squares) and terminating in Fairmount Park. The parkway substantially altered the original urban grid in this section of city.

The early twentieth century witnessed the rise and maturation of historic preservation in the United States. The National Park Service (NPS) was created in 1916, and with the passage of the Historic Sites Act of 1935, the responsibility of preserving and interpreting buildings, landscapes, and objects that were emblematic of American heritage fell upon the NPS. These events paralleled the development of American suburbs, which were made possible through the increased federal funding of highways and home loans, with one result being the relocating of affluent people from urban areas to suburban places. Federal funds were also used for urban renewal projects that were directed at addressing aging infrastructure in cities.

The area surrounding the State House—itself transformed many times over and renamed Independence Hall—was surrounded by a mix of eighteenth- and nineteenth-century structures that housed light manufacturing, retail, and restaurants. Between 1915 and 1940, concurrent with a rise in American patriotism, several proposals were put forth calling for the beautification of the area surrounding the Hall and the removal of buildings considered non-historic. In 1943, Independence Hall was designated a National Historic Site, and, three years later, the Philadelphia National Shrines Commission was created to preserve and protect the “jewels of democracy” that surrounded the Hall. In 1949, Congress authorized some $4 million to fund the demolition of non-historic buildings and the creation of public open spaces, with management by the NPS. State funding was used to develop the three-block-long mall that extends north from Independence Hall. The site was called Indepence Mall State Park when it opened in 1954. In 1974, the NPS assumed control of the site and its name was changed to Independence National Historical Park. In 1956, the NPS embarked on a ten-year plan to modernize and expand its visitor and interpretation services. Mission 66, as the initiative was known, was to be complete in 1966 in acknowledgement of the 50th anniversary of the passage of the Organic Act, which created the NPS. A new master plan for Independence Mall was created in 1997 by Olin Partnership (now OLIN). 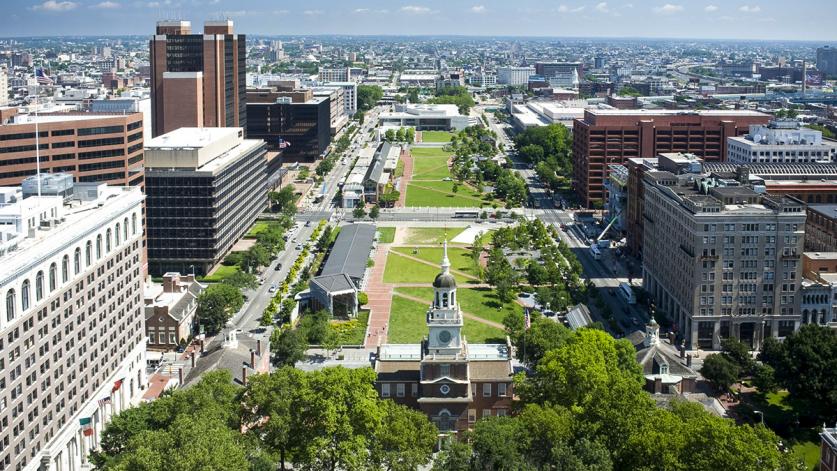 Concurrent with the development of Independence Mall in the 1950s and 1960s, Edmund Bacon’s tenure as executive director of the Philadelphia City Planning Commission resulted in the removal of warehouses and tenements and the revitalization of some of Philadelphia’s historic neighborhoods. For example, Society Hill, an eighteenth-century residential neighborhood that had become a commercial area, was revitalized with the restoration of historic buildings, the removal of incompatible structures, sympathetically designed infill, and the creation of richly detailed courtyards, pocket parks, and a greenway to harmoniously knit the expansive neighborhood together. Complementing Bacon’s efforts in Philadelphia’s historic center, grants from the Land and Water Conservation Fund in the 1960s and 1970s improved several parks, playgrounds, and amenities in neighborhoods throughout the city.

Today, Philadelphia includes one property, Independence Hall, listed on the UNESCO World Heritage List, 65 National Historic Landmarks, and more than 1,100 National Register of Historic Places designations. The Philadelphia Department of Parks and Recreation manages 63 distinct parks comprising more than 9,000 acres. Almost half of that area is encompassed by Fairmount Park, which, at 4,100 acres, is the largest municipal park in the nation.