Modernism, despite the popularity of Mad Men and shelter magazines like Dwell, is under assault. Iconic works of architecture and landscape architecture from the 1960s and 1970s have a particularly high mortality rate, though because of cultural and other biases, it's usually the endangered buildings we hear about and not the landscapes.

Two places, both recognized as Modernist masterworks, are currently facing complete destruction; one received front-page New York Times coverage on April 7, 2012, the other deserves the same level of national attention.

The Paul Rudolph-designed Orange County Government Center in Goshen, New York, writes New York Times reporter Robin Pogrebin, is considered a landmark by some and an eyesore by others. However, the decision on whether to renovate or demolish it apparently hinges not on aesthetics, but on costs. According to Pogrebin: "Each camp has its own estimate for how much it will cost to renovate the center -- the preservation side says about $35 million, the county says $65 million." 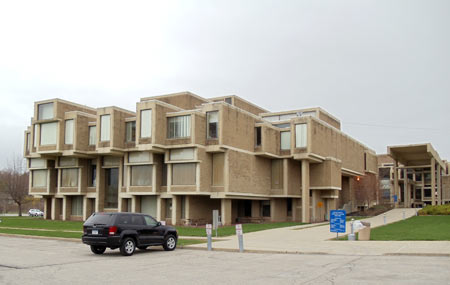 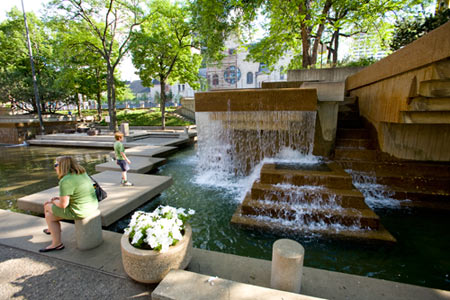 I'll leave you to read Pogrebin's piece and turn to the case that deserves national attention.

In Minneapolis, the M. Paul Friedberg-designed Peavey Plaza is also slated for demolition because the city says the site is in poor condition and restoration would cost too much money. For those who don't know about Peavey, it's located downtown adjacent to Orchestra Hall and a block from Target's corporate headquarters. Peavey is a two-acre "park plaza," as Friedberg calls it, "a mixture of the American green space and the European hard space" that was completed in 1975. According to the AIA [American Institute of Architects] Guide to the Twin Cities, "The plaza is considered a highpoint of modern-period landscape architecture in Minneapolis." Even today, nearly 40 years after its completion, the integrity of this Modernist gem is very high and the design largely intact. Nevertheless, officials at Orchestra Hall, which is undergoing a $45 million renovation, have decided Peavey doesn't work for them and should be replaced.

Peavey Plaza does need help. I know because, as I've written before, M. Paul Friedberg and I were on the team led by the Minneapolis-based landscape architecture firm Oslund and Associates the city selected to develop plans for the site. Unfortunately, Paul and I were shut out of the process before we could propose solutions that would maintain the integrity of Peavey's design while meeting contemporary demands and requirements, such as accessibility.

The city has skillfully stacked the deck against Peavey by creating a false set of choices; essentially, restore Peavey to its original condition or create something new. Strangely, the only people insisting complete restoration is an option are city officials. Friedberg and I never advocated that as we explained in an October 27, 2011 Minneapolis Star Tribune commentary, and preservation organizations locally and nationally have all endorsed the idea of adapting Peavey to address accessibility and other issues, while maintaining the integrity of its major design elements. Indeed, Friedberg has offered to share design solutions that address these concerns with Mayor RT Rybak, the City Council and other who have been pushing to demolish Peavey. 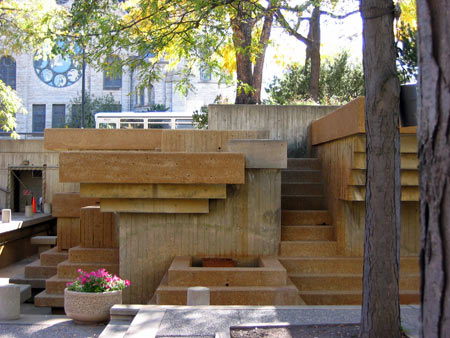 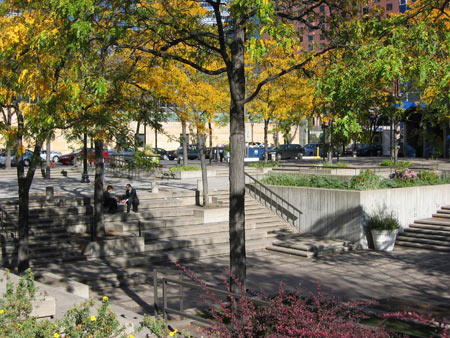 Unfortunately, the city seems determined to get its way and has come up with some head-spinning lines of reasoning. For example, the city's Department of Community Planning and Economic Development (DCPED) in a recent report supporting demolition has implied that adding an accessibility ramp to Peavey's existing design is a bad idea. Why? Because DCPED says it "would substantially alter the original design." Their solution? Destroy Peavey altogether.

Can someone explain the logic of this argument? That's about as sane as saying the light bulbs in your house aren't energy efficient, so we're tearing down your house to solve the problem.

They city has also cited the poor condition of Peavey, yet in their recently filed demolition permit they admitted their direct role in the problem: "An intentional effort has been made in recent years to hold the line on maintenance costs, including the decision not to repair some fountains and other infrastructure and to reduce the staff time at the plaza."

The city also says complete restoration of Peavey Plaza, which they claim is the most expensive option, would cost $8.7 million. However, the Minneapolis Star Tribune, in their editorial endorsing a new park design, estimates the total cost for the new park at $8-10 million, which means the complete restoration false choice is comparable or possibly less expensive. Setting aside that complete restoration false choice thing, if the city insists on pushing this argument, someone needs to check the math. How did the city come up with this number? What's it based on? And, more importantly, against what other budget is this being compared? Where's the budget for the new park.

The City has also said: "any rebuilding/renovation scenario will require millions of dollars in donations/private dollars." Shouldn't we ask those potential donors what they think? Let's go through the likely candidates, starting with those on the Orchestra Hall board: Wells Fargo, US Bancorp, General Mills, and RBC Wealth Management, or maybe their neighbor Target. OK, but the city has also said, "potential funders will not contribute millions of dollars to restore the plaza to its original design because it cannot address accessibility, safety, and sustainability issues adequately." 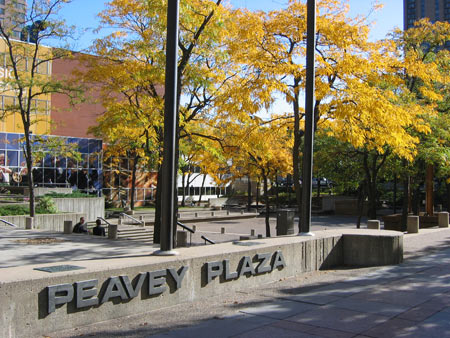 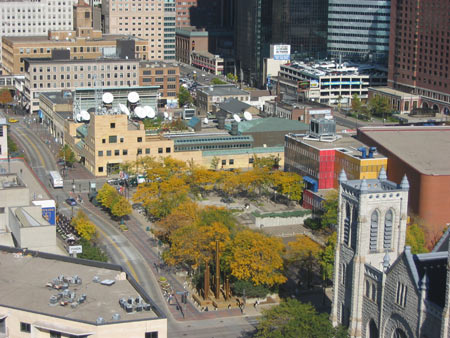 A couple of problems here: 1. There's the circular logic of that complete restoration false option again (does anyone else feel like they're watching a cat chase its tail?) 2. It's sounds like the city has already poisoned the well for any options other than destruction. Once Rybak gets his big hole in the ground funders will miraculously come tumbling out of the sky like so many putti from the clouds in an Italian Baroque painting to pay for the new park.

The next phase is a hearing before the city's Historic Preservation Commission (HPC), which released the DCPED's demolition recommendation on April 6 (both Passover and Good Friday! Talk about burying a story). They can decide to approve or reject the demolition, or postpone it for 180 days to allow for additional review. One of the commission members is Linda Mack, a former Minneapolis Star Tribune architecture critic who helped select the architect for Orchestra Hall's renovation and was, as the Star Tribune noted, a "communications adviser to Oslund and Associates," who led the Peavey redesign process. I think it's fair to ask if Ms. Mack has had any involvement whatsoever, including any formal or informal discussions with other commission members and staff, about the future of Peavey, and whether she will be voting on the DCPED's demolition recommendation.

The city, if it offers any rebuttal, will go through its usual litany of talking points about open and public process, and so on. Sorry, but repeating something often enough doesn't make it true -- remember that whole thing about weapons of mass destruction in Iraq?

Friedberg recently told me that while working on Peavey in the 1970's he, "was so impressed with the integrity that [Minneapolis] had, [it] stood out as a special place, their politics, their civic duty. They made sure everyone had a voice."