On Thursday, July 19, 2018, the U.S. Commission of Fine Arts (CFA) unanimously approved the design of a World War I memorial to be built in Pershing Park in Washington, D.C. The park was originally designed by landscape architect M. Paul Friedberg, with a subsequent planting plan by Oehme, van Sweden & Associates, and has recently been deemed eligible for listing in the National Register of Historic Places. The main feature of the memorial is a sculptural wall, 56’6” long by 11’ tall, that will be inserted into the heart of the park, replacing the cascade fountain and part of the pool, portions of which could be paved. The freestanding sculptural wall would feature a high-relief frieze on its front surface, facing eastward over the remnants of the pool, and a cascade on its reverse side, facing west. Various concepts were presented for paving portions of the pool and reducing its current 12” depth to a mere ¼” scrim.

The CFA’s approval was notable because the freestanding-wall concept, along with an alternative design that would have embedded the wall into the west end of the cascade and pool area, had already been presented just two months earlier, in May 2018. During that meeting, CFA Commissioners were critical of the wall, calling it a “stubborn element” in the design and ending the meeting without acting to approve it. At that time, the World War I Centennial Commission (WWICC) had indicated that it preferred the embedded-wall concept; but at the July 2018 meeting, the WWICC switched its allegiance to the freestanding-wall concept, which won the CFA’s approval. 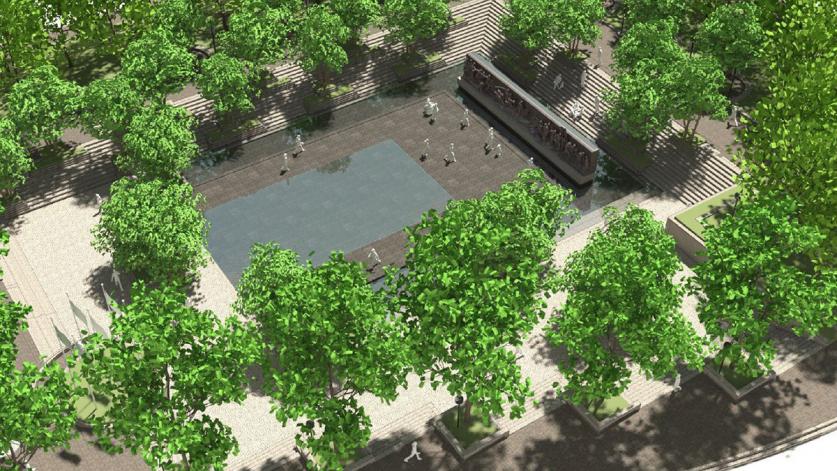 Rendering of WWI memorial preferred option, as presented at CFA meeting on July 19, 2018

The CFA meeting, the seventh to consider the design of a WWI memorial, was a packed, standing-room-only event attended by former U.S. Secretary of the Navy and U.S. Senator John Warner, former U.S Ambassador and U.S. Senator Carol Moseley Braun, as well as many veterans and other supporters. CFA Secretary Tom Luebke reported that more than 270 letters in support of the memorial had been received, although most, he said, were form letters.

WWICC Commissioner Libby O’Connell began the presentation of the freestanding- wall concept in compelling and gracious fashion. Consulting landscape architect David Rubin offered a comprehensive overview of the preferred design, as well as some alternatives, and concluded with a video animation of a completed memorial.  Arguably the most impassioned remarks were provided by WWICC Chair Terry Hamby, a Vietnam War veteran whose voice cracked on several occasions as he spoke of the need to remember those who served in World War I; he concluded by saying that the great tragedy of war is to be forgotten.

Letters were also received from park advocates, including The Cultural Landscape Foundation (TCLF), Docomomo, the D.C. Preservation League, D.C. Green Spaces, Oehme van Sweden & Associates, and Darwina Neal, the former chief of cultural resource preservation services with the National Park Service. The advocates raised concerns about the impact of the freestanding wall on the Friedberg design and recommended that the sculptural wall be sited in the same location as a large kiosk currently in the park. TCLF and others suggested that the sculpture could be displayed in the round on the site of the kiosk, thus preserving the historic  tripartite relationship among the kiosk, the cascade and pool, and the statue of General Pershing. As TCLF’s Charles Birnbaum noted, locating the sculptural wall in the round on the site of the kiosk would also meet the Secretary of the Interiors standards for rehabilitation.

The WWICC’s May and July presentations were so similar—in her remarks, Ms. Neal referred to the latest presentation as “Groundhog Day”—that it raises the question of why the CFA gave a green light to a project about which it had previously expressed serious reservations only two months earlier. Indeed, the potential paving of sections of the pool, which had raised serious concerns in the May meeting, was now even more extensive, and the idea of a scrim in place of a pool seemed to gain favor. 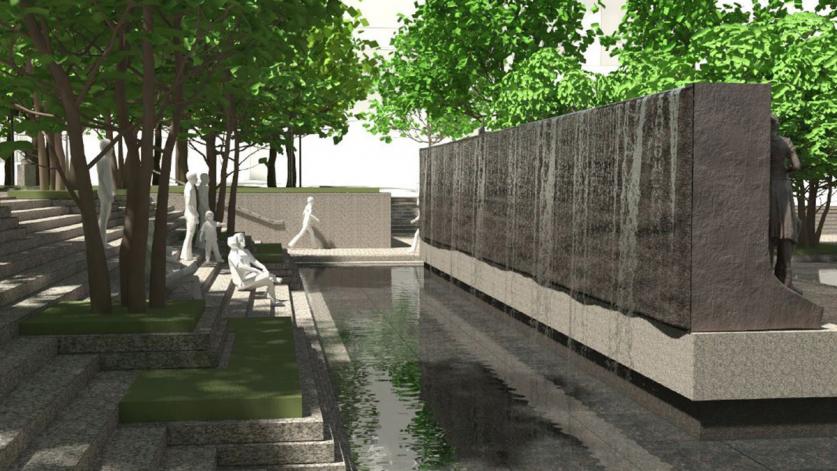 Rendering of the west facade of the sculptural wall (preferred option), as presented at CFA Meeting on July 19, 2018

One issue that received no attention was the degree to which the freestanding wall would block sightlines between the upper and lower terraces of the park. The WWICC’s video animation made clear that, especially for those accessing the memorial from the southwest corner, visitors would have difficulty seeing over the wall into the lower plaza of the park. Another issue left unaddressed was the space behind the memorial wall, directly to the west. In the approved design (above), water would fall in a cascade over the back of the wall, but there would appear to be no compelling reason for anyone to go to or linger in that area, where they would be isolated and most often in shadows. Perhaps these issues and others will be addressed when the project goes before the National Capital Planning Commission.

The longer-term implications for Pershing Park and the Pennsylvania Avenue Historic District have yet to be determined. Will Pershing Park still be eligible for listing in the National Register of Historic Places after the construction of the memorial? Will adverse changes to the park affect the potential for a broader period of significance for the historic district? And lastly, what of the legacy of American Society of Landscape Architects (ASLA) Design Medal recipient M. Paul Friedberg?  His most revolutionary work—the landscape at Riis Houses in New York City—was demolished in 2000 with little public input. And with recent changes to Peavey Plaza, in Minneapolis, Minnesota, and the latest proposal for Pershing Park, two of Friedberg's most important park plazas—a typology that he invented—will have been altered forever. Despite the seeming permanence of iconic places like New York City’s Central Park, landscape architecture is an innately ephemeral art form, and what is now happening at Pershing Park is a sobering reminder of that reality. 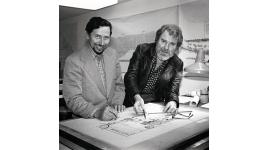