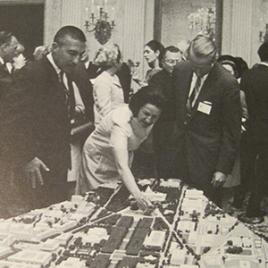 Lady Bird Johnson was wife of the 36th President of the United States, Lyndon Baines Johnson, and First Lady of the United States (1963-1969). While on the road during the 1964 campaign, she was struck by the proliferation of billboards and unsightly views of junkyards on major highways.  She convinced the President to tackle the issue, resulting in the passage of the Highway Beautification Act in 1965.

Once the legislation was approved, Lady Bird Johnson focused her beautification efforts in Washington, D.C. by forming a coalition of both public and private entities, including Secretary of the Interior Stewart Udall, local Washington, D.C. government officials, philanthropist, architects, planners, landscape architects and private citizens, including school groups and neighborhood beautification committees.

Johnson formed the First Lady’s Committee for a More Beautiful Capital whose goal was to improve physical conditions in Washington, D.C., for both residents and tourists.  She worked closely with landscape architect Lawrence Halprin to develop a plan for the Anacostia Waterfront that connected three existing recreational facilities, the National Arboretum, RFK Stadium and Kenilworth Aquatic Gardens into a coherent public landscape balancing environmental and social concerns.  Johnson raised money from New York philanthropists to finance Halprin’s master plan, which was ultimately shelved.  The Committee also oversaw the planting of millions of bulbs and flowers, many on National Park Service parks and parkways around the capital.

After she left the White House, she continued her efforts in beautification and worked extensively with the American Association of Nurserymen to protect wildflowers and encourage plantings along highways.

In 1982, Lady Bird co-founded the National Wildflower Research Center with actress Helen Hayes.  The nonprofit organization focuses on preserving and reintroducing native plants. The center was renamed the Lady Bird Johnson Wildflower Center in 1995 in acknowledgment of her extensive fund raising for the facility.

Lady Bird Johnson received the Presidential Medal of Freedom in 1977 and the Congressional Gold Medal in 1988 for her public service contributions. She passed away at her home in Austin, Texas, on July 11, 2007. 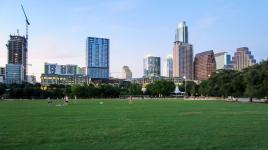 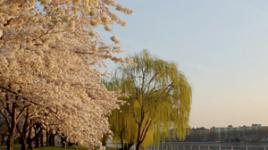