Freeway Park: Past, Present, and Future?

Freeway Park: Past, Present, and Future?

Freeway Park, executed by Lawrence Halprin's office under the design direction of Angela Danadjieva, is one of the most compelling treatises on post-War landscape architecture that survives today.

Perched above Interstate 5 in downtown Seattle and using 5.5 acres of interstate air rights, the linked spaces of the park evocatively and imaginatively engage the three major preoccupations of post-War landscape design as described by Elizabeth K. Meyer: the car, the garden and the growing awareness of ecology. Yet like so many other modernist works, Freeway Park is threatened by poor maintenance, shrinking budgets and the threats attendant with community revitalization.

After Halprin's publication of the book Freeways in 1966 (see diagram below) and his work with the Federal Highway Administration's Urban Advisors group, the Seattle Parks Commission sought his assistance in designing a park along the edge of the new interstate gorge. Rather than confining himself to the proposed plot of land, Halprin pushed the ideas in his book into the cityscape by proposing an extensive landscape that scaled down the impact of the freeway for both driver and pedestrian by building right over it. Rather than balking at this audacious plan, the proposal was bundled into the countywide open space bond measure called Forward Thrust, and, in 1969 approved local funds were combined with state, federal and private monies to allow the park plan to move forward.

The space is defined by a series of linked plazas that are intertwined and enclosed by board-formed concrete planting containers and walls. These major spaces are known as the Central Plaza, East Plaza, and West Plaza. Consistency and cohesion between these spaces is developed through a shared materials palette of concrete, broadleaf evergreen plantings and site furnishings. The spaces are differentiated through the dynamism of the water features that occupy the spaces and the attendant differentiation of moods.

A roiling precipice of water in freefall dominates the Central Plaza, tumbling over an assertive assemblage of overhangs and outcrops. The design effect of 28,000 gallons per minute tumbling over 30-foot-tall formed concrete blocks is at once rugged and decidedly urban: a space that is consciously of the city yet inspired by the morphological capriciousness of the Cascade and Olympic Mountains. By placing the water feature over the canyon of the freeway, the "natural" gorge was able to drown out-or at least ameliorate-the roaring sound of the artificial, automotive flows below. 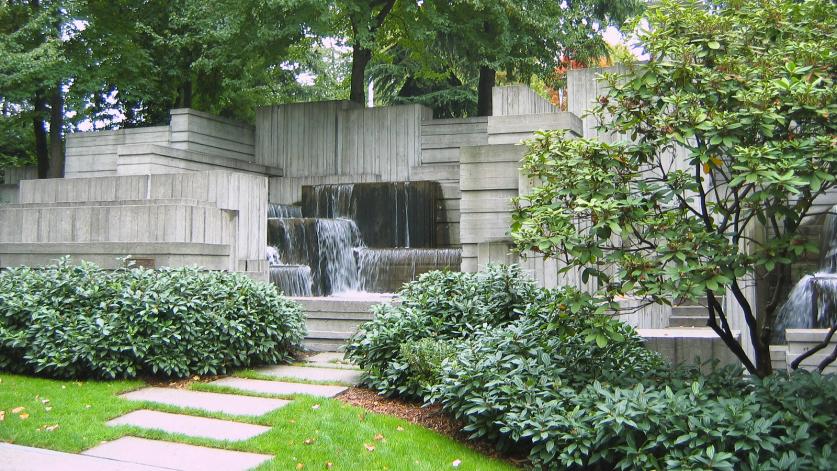 Like an idyllic mountain stream, the fountain was filled with children and parents when it opened on July 4, 1976 as part of Seattle's bicentennial celebrations. Though there are no guardrails protecting visitors from the water; Halprin's design intent heightened an explicit sense of danger so that people are confronted by risk prima facie and are therefore cautious. Near the base of the canyon, a heavy-gauge glass window allows visitors to see cars driving by, creating a dynamic visual dialogue between nature (water) and the city (the cars of the freeway).

The framework for these original elements still exists, but the experience of the canyon today is significantly degraded. A steel screen now covers the canyon's window, obfuscating the connection to the freeway, and the falls themselves are tragically under served. While there were three pumps that originally fed water to the canyon (using two at a time, cycling through the third), today only two pumps remain and with only one pumping water at a time. The capacity of this one pump has since been reduced by 30 percent to where the 28,000 gallons per minute of the original design is now reduced to a relative trickle near 9,500 gallons per minute when running. Most of the time, however, the canyon water feature is not even active. Again due to increased safety standards and reduced maintenance budgets, parks officials are not easily able to access all of the basins and traps within the fountain to clean out debris before starting the pumps.

Throughout the park, the role of vegetation is not limited to aesthetic or architectonic purposes, rather plants were also chosen for their ability to reduce pollution and baffle sound coming from the freeway below. As in Halprin's Portland open space sequence, the original planting plans reveal a placement strategy that develops an analog to the larger landscape surrounding Seattle. Lower levels are heavy with Rhododendron and Alnus; higher levels are dominated by Kinnikinick, Cedrus deodora and other upland tree species. Although the park appeared sparsely planted at its onset, the vegetation has grown dense and required limbing up for maintenance and security reasons. Similar to the controversy that swirled around San Francisco's U.N. Plaza and Denver's Skyline Park, the park is often viewed as blighted and undesirable as transients and drug users emerge from the vegetated planters above the freeway.

The park has also seen the continual, creeping erosion of other original design elements. The jagged paving pattern has been infilled with small concrete pads that have been poured to dissuade large gatherings of transients. Many of the original light towers have been replaced with smaller standards. Entire planter boxes have been denuded of vegetation due to drainage problems in some of the beds. Other plantings have been replaced with species that tried, with varying success, to echo the spirit of the original design, including Hamamelis, Rubus calycinoides and Styrax. 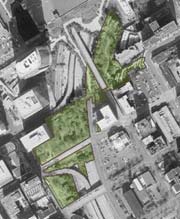 Right now, the City of Seattle has allocated funds to conduct a study on how to revitalize Freeway Park. Seattle's Mayor, Greg Nickels, has said recently, "we must not turn our back on the park again." At a recent public meeting, city of Seattle staff unveiled draft recommendations that were submitted as part of a visioning and activation report prepared by the New York City-based Project for Public Spaces (PPS). Propelled by neighborhood interest groups who want to see a beloved park returned to its full glory, PPS made several insightful programming recommendations that could serve to make the park more safe and habitable throughout the day. Yet noticeably lacking from the presentation was any language referring to the precedent-setting status of the park or its ingenious design team. Some design recommendations included significant reworking of the original Halprin plan including demolition of some of the concrete retaining walls, redesigning or removing at least two of the original fountains, and installing a series of exercise stations.

While the implementation of many of these efforts can be done sensitively, there is currently no agency overseeing the preservation of this historic park. A Seattle Landmarks nomination is currently being prepared and will be submitted to the city in the near future. With design monies allocated for 2005, landmark designation will provide an additional level of review before the integrity of yet another Halprin masterwork is lost forever.

We urge you to support the nomination to ensure that this invaluable legacy endures. Letters should be tailored to include your own thoughts on why Freeway Park is such a special place.