Overdevelopment is doing to cultural landscapes what excessive plastic surgery has done to … well, I won’t name names. But I will say after spending two weeks in the Hamptons, I can point to egregious examples of both.

OK, that was a gratuitous opener, but there’s a method to my finger pointing.

I did just spend two wonderful weeks at a charming saltbox house in Amagansett, thanks to my great friend Tom Cody. As was the case last year, Tom’s home was both a vacation spot and base of operations for visiting gardens in the Hamptons. The handful of towns on this bucolic part of Long Island’s East End, with quaint street names like Hither Lane and Further Lane, were first settled in the mid-1600’s and into the last century were still very agrarian. There remain some farms and centuries old homes, but there has been a lot of development in the past 30 years, some of it sympathetic (the Whitefield Condominiums in Southampton), some not (that 100,000-square-foot behemoth on Daniels Lane). That said, the Hamptons retain a distinct character. But for how long?

The New York Times recently ran an article about 81-year old Evelyn Konrad who is asking that very question (“In the Hamptons, Going Against the Tide,” July 10, 2010). She got a law degree in her 70’s and now is taking on village officials, builders and homebuyers suggesting that the size of many of the new Southampton homes violates local laws. Sally Spanburgh, a local architect and blogger quoted in the article, succinctly contextualizes the issue: “it’s about community and connectedness, and I think that Evelyn has shown us that we can lose all that.” 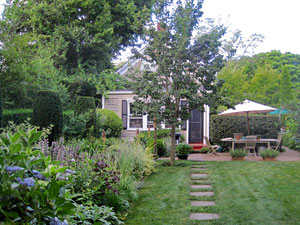 (top left) Rosenberg Garden. (above) Griswold Garden. Konrad was very much on my mind as I visited several friends and their gardens … and saw what was happening in their neighborhoods. Carole and Alex Rosenberg in Watermill have an early (1980’s) and beautiful “New American Garden” by James van Sweden and Wolfgang Oehme. And right next door, looming visibly over a tall hedge, huge new residential construction. Over in Sag Harbor, garden historian Mac Griswold has a charming home with an artfully rambunctious garden. Homes on her block, which average 1,200 square feet, will soon be dwarfed by a 19-unit luxury condo project at the end of the street.

Spurred by Konrad’s quest, I asked friends and colleagues the following: Can’t something be done to reverse this trend? Why is there such acceptance and complacency and not a willingness to act? How do we place a value on the collective cultural landscape of the Hamptons and make it visible to the public? When does the accumulated loss of community character: sky, horizon line, unpaved roads, hedgerows, not to mention the loss of open space as agriculture (e.g. potato fields, orchards) reach the tipping point? To borrow from the global warming discussion, how many more ice caps have to melt before the threat is real?

As long as our cultural landscapes remain invisible, and we don’t apply methods for assigning their value, we can expect more landscapes to serve as sacrificial lambs for new building construction. Like the ice caps, when they’re gone, they’re gone.