On October 28, 2019, an open house and panel discussion were held at Town Hall Seattle, where attendees learned more about the history of the groundbreaking Freeway Park and the Freeway Park Improvements Project, which is now in the development and design phase. Hosted by Seattle Parks and Recreation and the Freeway Park Association, the event drew some 100 community members and city officials eager to learn more about the future of the iconic Modernist landscape that was the first park ever built atop a highway.

The project to restore and rehabilitate Freeway Park is one of several mitigation measures arising from the Washington State Convention Center Expansion Project and the Section 106 review process that resulted from it. With a total budget of $10 million, $6 million of which is slated for construction costs, the project aims to “make the park more welcoming, bring people back to the park, and restore its role as a centerpiece of Seattle’s park system and an icon of landscape architecture.” With construction planned to begin in summer 2020, the design team is led by the landscape architecture firm Walker Macy, with the Freeway Park Association as a key partner.

After introductory remarks by Jesús Aguirre, superintendent of Seattle Parks and Recreation, Lara Rose, a principal with Walker Macy, gave an overview of the project and the design team’s key observations to date. Rose noted that several of the park’s features are in need of repair, including its fountains, irrigation and drainage systems, its paving, plantings, furnishings, lighting, and restrooms (the latter have been closed for many years).

We intend to approach the project with a great deal of rigor and respect...this project will honor the original design intent. - Lara Rose, principal of Walker Macy

Also among the project’s central concerns are the park’s entrances and exits, which many believe are relatively difficult to find. The plan is to establish four of the twelve entrances as primary entrances by adding visual cues and features that strengthen their presence. There are also many separate routes through the park, and the team is considering ways to make connections along the paths more intuitive and to establish two routes as primary corridors. Discrete areas within the park, such as the upper lawns, may offer opportunities for play or activities, and the addition of two small structures to support new programming is being considered. Another factor is the park’s role as a destination for people experiencing homelessness, which public outreach efforts have taken into account.

As Freeway Park adapts to the considerable change that has taken place around it since it opened in 1976, its significance as an historic, designed landscape will be of paramount concern. “We intend to approach the project with a great deal of rigor and respect,” Rose said, adding that “this project will honor the original design intent.” 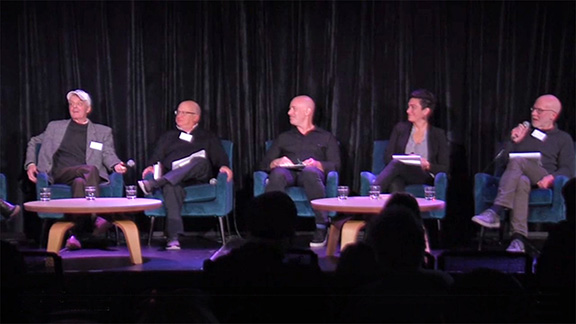 Following the presentation, a panel of experts on Halprin’s work took the stage to share their thoughts about the project and the significance of the park. The panelists, who had visited the park along with members of the design team earlier in the day, shared insights on a variety of topics, with Brice Maryman, the director of landscape architecture at SvR Design Company, serving as the moderator. Randy Gragg, executive director of the Portland Parks Foundation, emphasized the high level of craftsmanship in the park, including the precision of the concrete pours, which must be matched in any work to restore the park's significant features. Iain Robertson, associate professor of landscape architecture at the University of Washington, spoke mainly about the plantings. Having been personally involved in the replanting plan for the park many years ago, Robertson noted that a much busier freeway today may call into question the function of the park’s box terraces. Professor Alison Hirsch, author of the recent book City Choreographer: Lawrence Halprin in Urban Renewal America, also stressed the connection between the park and the freeway, which, she said, needs to be reignited.

TCLF’s Charles Birnbaum placed the landscape in the context of a work of art, noting that the thoughtful consideration of the original design is itself a reflection of how far the recognition of landscape architecture has come in recent decades. And Kenneth Helphand, author and professor emeritus of landscape architecture at the University of Oregon, remarked on the need to maintain the park’s sense of surprise and discovery: “The park is no longer new, but if anything I think its innovative character and design have been amplified over time.” 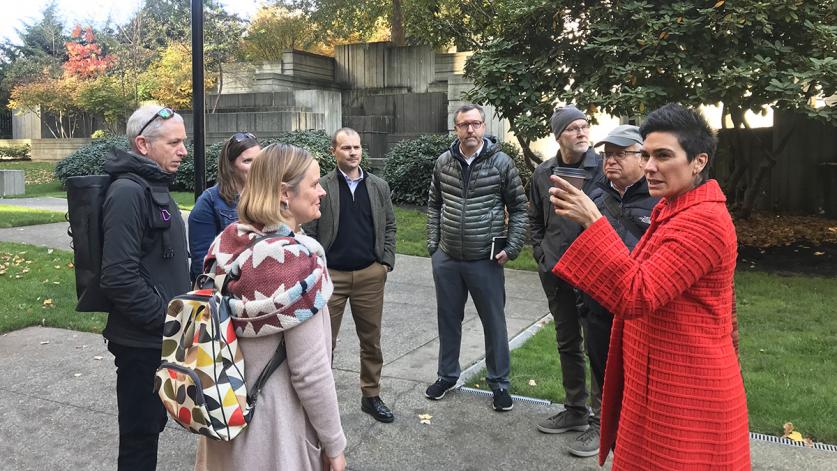 Panelists meet in Freeway Park prior to the Town Hall event - Photo by Charles A. Birnbaum, 2019

As these and other discussions continue, efforts to restore the park will also be subject to the mandates of a Programmatic Agreement established in the recent Section 106 review process. According to that document, work on Freeway Park must comply with the Secretary of Interior’s Standards and Guidelines for the Treatment of Historic Properties, as well as specific guidance in the Secretary of Interior’s Guidelines for the Treatment of Cultural Landscapes.

Meanwhile, at a meeting on October 25, 2019, the Washington State Advisory Council on Historic Preservation moved to list Freeway Park in the Washington Heritage Register. The park was simultaneously recommended for listing in the National Register of Historic Places, and the nomination has been forwarded to the Keeper of Register, where it is now under consideration. 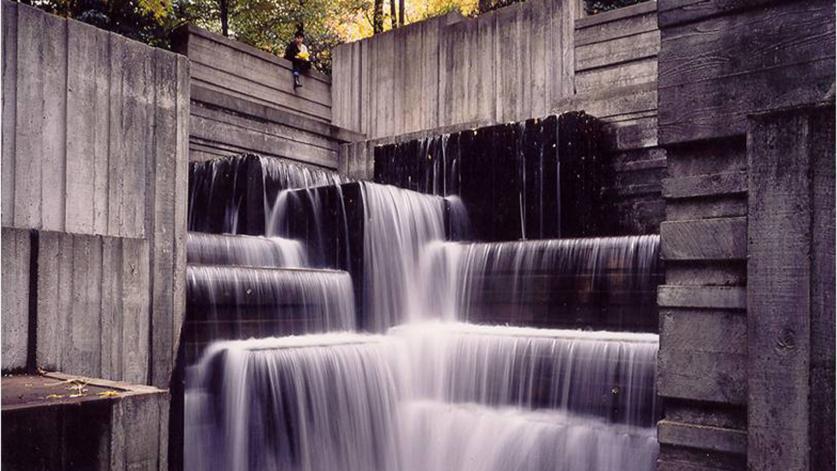 Conceived by Lawrence Halprin & Associates under the design direction of Angela Danadjieva and built atop Interstate 5 in downtown Seattle, Freeway Park was the progenitor of a new design typology—emulated to this day—that boldly reimagined the role of the public park as an element of infrastructure. The park’s linked plazas are intertwined and enclosed by board-formed concrete planting containers and walls, and its many discrete areas are differentiated by dynamic water features. The park as a whole is unified by a shared materials palette of concrete, broadleaf evergreen plantings, and site furnishings.

The recent panel discussion can be viewed here. A Freeway Park Improvement Project Survey is also available, and the public is encouraged to share their opinions about the project.