In a January 11, 2021 interview in the Art Newspaper about the Hirshhorn Sculpture Garden redesign, Hiroshi Sugimoto, the artist commissioned to do the work, was adamant about including stacked stone walls in the modernist landscape going so far as to threaten to quit the project unless he got his way: “’If you cannot accept this key part of the redesign—I do everything 100% and I would have to withdraw from the redesign,' Sugimoto says of the stones.” 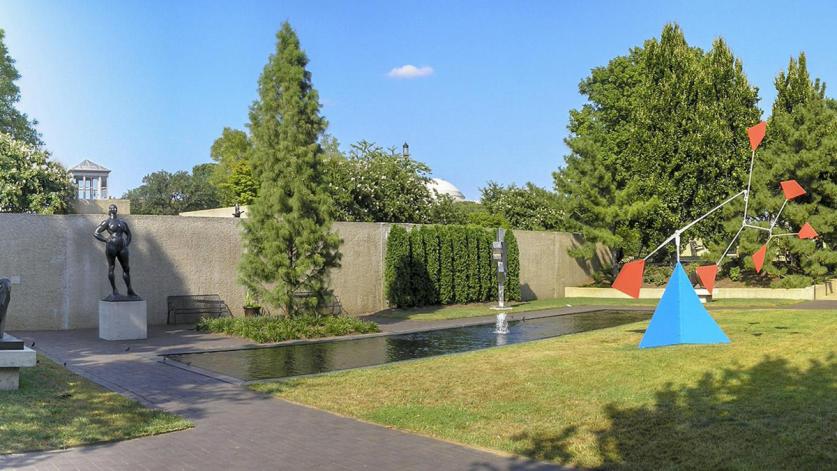 Officials connected with the project were questioned about Sugimoto’s threat at a March 10, 2021 Section 106 meeting about the Sculpture Garden revitalization.  Hirshhorn deputy director Jaya Kaveeshwar and YUN Architecture principal Felix Ade both said that Mr. Sugimoto, and the Hirshhorn and Smithsonian teams have been “responsive” to public comments and input, but they never denied that Mr. Sugimoto had threatened quit if he didn’t get his stacked stone walls.

For nearly two years, Hirshhorn and Smithsonian officials have been insistent about the necessity for two major alterations at the Sculpture Garden: changes to the pool and pool area and the introduction of stacked stone walls. While they have tinkered with various iterations of the pool area, there has been no meaningful change concerning the stacked stones walls. Moreover, they have determined and documented that these changes would have negative impacts ("adverse effects" in federal parlance) on the historic design by architect Gordon Bunshaft and the later overlay by landscape architect Lester Collins.

In fact, Hirshhorn and Smithsonian officials have gone to considerable lengths to justify the inclusion of stacked stone walls. At the October 7, 2020 Section 106 meeting, Hirshhorn director Melissa Chiu gave a somewhat convoluted rationale for the stone walls. In addition, a standard part of their public presentation includes a photo of sculptor Henry Moore and Joseph Hirshhorn looking at one of the artist’s sculpture in the latter’s estate in Greenwich, CT with the two standing in front of a stone wall. Problem is, Mr. Hirshhorn lived in a French Normandy-style chateau, not a modernist design by Gordon Bunshaft of Skidmore, Owings & Merrill. 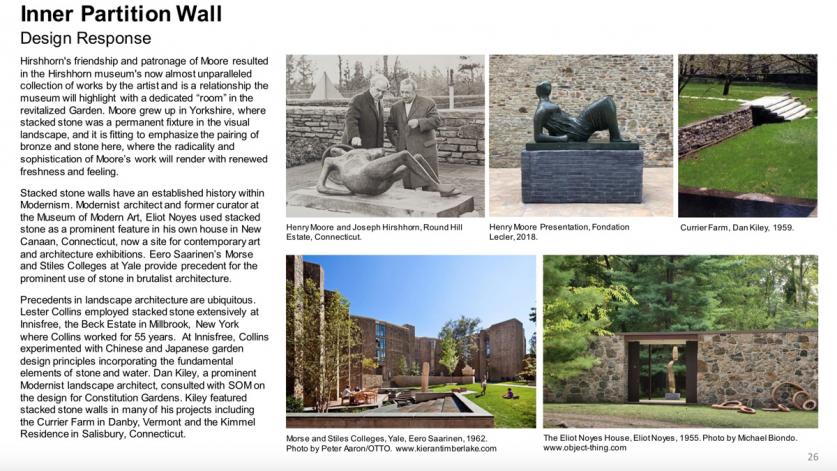 Part of the March 1, 2021 presentation featuring justifications for stone stacked walls at the Hirshhorn - Courtesy Hirshhorn Museum and Sculpture Garden

In the Hirshhorn’s March 1, 2021 proposal, issued in advance of the March 10 Section 106 meeting, we’re told that Mr. Moore “grew up in Yorkshire, where stacked stone was a permanent fixture in the visual landscape, and it is fitting to emphasize the pairing of bronze and stone here, where the radicality and sophistication of Moore’s work will render with renewed freshness and feeling.” Interesting, perhaps, but irrelevant, as are images of non-modernist style parks on the National Mall with stone walls and modernist projects that included stone walls as part of their original design (and not later additions as proposed at the Hirshhorn).

Perhaps sensing that these and other justifications are falling flat, the Hirshhorn has come up with a new reason for needing stacked stone walls: acoustics. According to Hirshhorn associate curator Anne Reeve, the inner partition wall’s flat concrete surface can “reflect sound creating acoustical echo and making performance acoustics very difficult to negotiate.” Smithsonian historic preservation specialist Carly Bond said: “In contrast the angled surface of the stacked stone wall redirects reflected sound upwards to avoid acoustical anomalies like echoes.” Mr. Ade, the architect claims: “Our studies have found that the new shape of the wall will improve the acoustics by 90% and over what currently would exist with the current wall.” These are very generalized statements and claims. In fact, Mr. Ade does not state what his measurement refers to. Consequently, TCLF has requested that these studies be made public.

The day after the Section 106 meeting the Wall Street Journal published a review – The Hirshhorn Sculpture Garden Redesign: Paving Paradise – that begins:

The Hirshhorn Museum’s Sculpture Garden in Washington is nearly perfect; of course, it must be destroyed. This is the paradox of landscape architecture: The more sensitive and subtle the garden, the more invisible it is—even to its custodians. At a certain point they can mistake it for an opportunity to exploit rather than a sacred trust to protect.

In the space of three lines critic Michael Lewis gets to the essence of the problem: [a] the specific threat to the Sculpture Garden, and [b] the broader threat to significant historic designed landscapes. What makes this especially troubling is that the Hirshorn, a leading national cultural institution, sees its Sculpture Garden as “an opportunity to exploit rather than a sacred trust to protect” and they’re seemingly willing to cave to Mr. Sugimoto’s threat.

Planning Officials on the Hirshhorn Sculpture Garden Redesign – Not so Fast
Dec 06, 2020
Landslide

Playing Peek-a-boo at the Hirshhorn
Nov 20, 2020
See all related