At 897 acres Flushing Meadows Corona Park is the largest park in New York City’s borough of Queens. Created for the 1939 World’s Fair, and an early example of a successful environmental remediation and land reclamation project, the park is an integral public open space both in the Queens community and in the greater New York City area. A product of its history, the site has been shaped by two World’s Fairs and the work of noted landscape architects Gilmore Clarke and Michael Rapuano who laid out the exposition grounds (and had a hand in the design of much of New York State’s public infrastructure during the first half of the 20th century). Unfortunately, recent plans announced by New York City’s Mayor Bloomberg and Major League Soccer to construct a 13-acre soccer stadium put the integrity of the park’s historic core at risk. 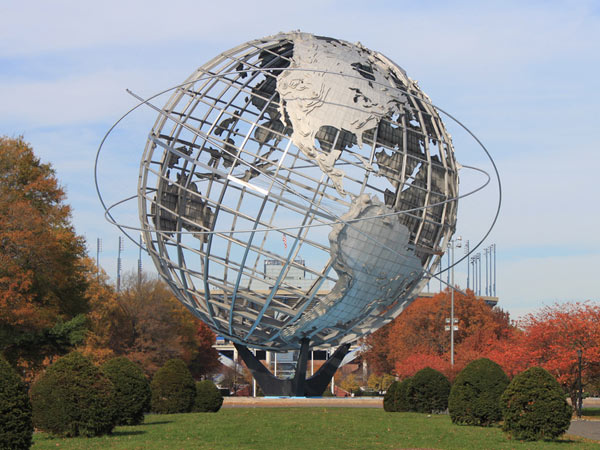 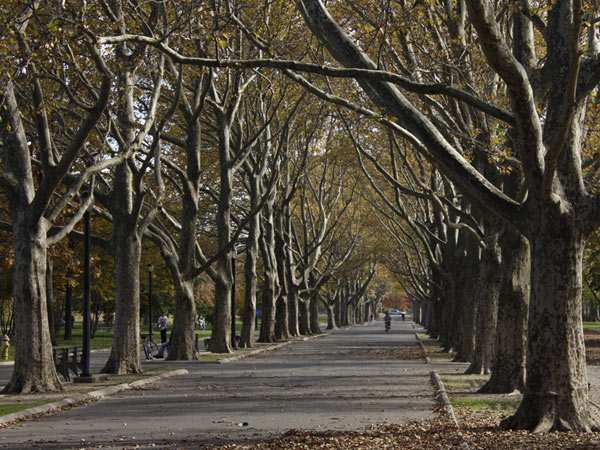 Once an extensive salt marsh at the head of Queens’ Flushing Bay, the area that would become Flushing Meadows Park obtained infamy in F. Scott Fitzgerald’s The Great Gatsby when he wrote “This is the valley of ashes, a fantastic farm where ashes grow like wheat into ridges and hills and grotesque gardens…” Christened the Corona Ash Dumps after the Brooklyn Ash Removal Company relocated to the site in 1909, the marsh became a regular dumping ground for ash from coal-burning furnaces, manure and household garbage.

In 1930, New York City Parks Commissioner Robert Moses undertook the daunting task of reclaiming the contaminated site. He saw to the removal of a significant portion of the accumulated refuse, setting the stage for the Parks Department to purchase the land in 1934. When the 1939 New York World’s Fair was announced, the 897-acre parcel was selected as the site for the event. Moses commissioned landscape architects Gilmore Clarke, a member of the World’s Fair Design committee, and Michael Rapuano, to lay out the exposition grounds. Their plan for the park emphasized the geometric Beaux-Arts approach that was popular at the time, setting out formal allées and walks in the core of the site which radiated from a central axis, designed as a linear reflecting pool. To the south they created two large manmade lakes, Meadow and Willow, by using a dam to stem the water flow of the site’s Flushing Creek. Three expressways were constructed to provide circulation through and around the exposition grounds. Moses stipulated that ash from the former dump be incorporated into the road’s paving, a formal reminder of the site’s early history which helped to alleviate some of the burden of determining what to do with the mountains of ash that were removed from the site. 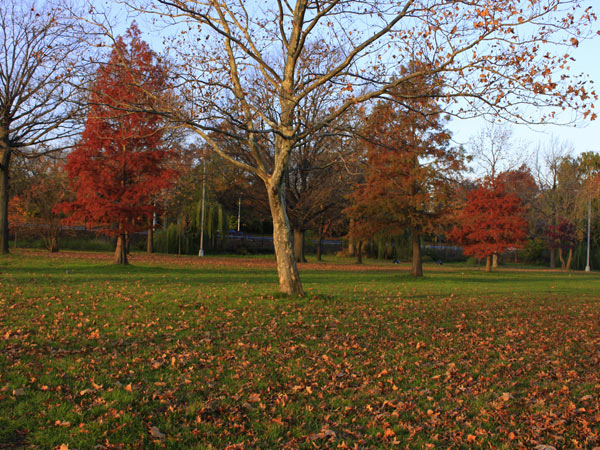 Park open spaceWhen plans were announced for the 1964-1965 New York World’s Fair, Moses pushed for the park to once again host the event. Clarke and Rapuano resumed their former role as landscape architects for the exposition. While most of the park’s core design was retained, the linear reflecting pool was replaced with a central promenade, allowing for the construction of a number of significant new structures. Of particular note were the New York State Pavilion, designed by architect Philip Johnson with landscape architects Zion & Breen Associates, and the Unisphere, a 12-story stainless steel replica of the earth designed by Gilmore Clarke, built on the site of the earlier World Fair’s famed Trylon and Perisphere. After the Fair’s end the park was placed under the control of the New York City Department of Parks and Recreation, opening as a municipal park in 1967, under the moniker Flushing Meadows-Corona Park.

Today, as noted in a Strategic Framework Plan begun in 2004, the park consists of seven main areas: to the north, the Marina and Sports area; at the center, the Historic World’s Fair Core Area bounded by West Park to the west and the recreation and garden botanical area to the east; and the naturalized Meadow and Willow Lakes areas to the south. 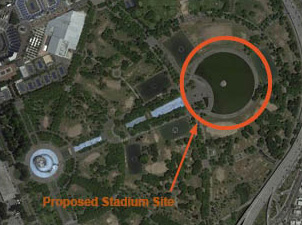 In 2013, the Bloomberg Administration and Major League Soccer announced plans to build a 13-acre professional soccer stadium in the historic core of the park. Public parkland has already been carved out for the 46.5-acre US Tennis Association’s Billie Jean King National Tennis Center (home of the US Open) that incorporates the Arthur Ashe Stadium  (the world’s largest outdoor tennis-only facility), the 20,000-seat Louis Armstrong Stadium and dozens of additional courts; the 41,800-seat Citi Field baseball stadium, home to the New York Mets; the 110,000-square-foot Flushing Meadows Corona Park Pool & Rink (the largest recreation complex ever built in a city park); a zoo; an art museum; a botanical garden; and a science museum.  The proposed soccer stadium, which would be the only constructed sports venue located in the park’s cultural center, would replace the Fountain of the Planets, a 6.5-acre basin created for the 1964-65 World’s Fair, and 6.5 acres of land surrounding the fountain. The site is located in a strategic position, at the eastern terminus of Clarke and Rapuano’s Beaux Arts central axis, which is anchored at the west by Clarke’s Unisphere. Construction of the stadium would both visibly and spatially mar the intent of Clark and Rapuanos’ Beaux Arts plan and central spine, and privatize another 13 acres of public parkland.

Write a letter to the decision-makers at City Hall, and tell them that a Major League Soccer stadium does not belong in the heart of this historic park: