Pershing Park and the World War I Memorial: Moving Beyond an Accumulation of Pieces

Pershing Park and the World War I Memorial: Moving Beyond an Accumulation of Pieces

Pershing Park and the World War I Memorial: Moving Beyond an Accumulation of Pieces
Feb 27, 2017

One of the most important parks on the most significant stretch of America’s Main Street – Pennsylvania Avenue between the U.S. Capitol and the White House, known as the Pennsylvania Avenue National Historic Site – remains under threat. The future of Pershing Park is an example of how first tier works of landscape architecture too often are still treated like second-class amenities. Pershing, which is named in honor of the great American World War I General John Pershing and opened in 1981 two blocks from the White House, is a modernist park/plaza designed by landscape architect M. Paul Friedberg, creator of this typology. It has a planting plan by the pioneers of the New American Garden style, Wolfgang Oehme and James van Sweden.

Through an act of Congress, the park has been renamed the national World War I Memorial, and a World War I Memorial Commission is seeking to build a new memorial on the site. A design competition was held that yielded hundreds of entries. In my June 16, 2015 article Can Parks and Memorials Happily Co-Exist? about the design competition that was then underway, I concluded: “It would be encouraging to see entries from landscape architects and allied professionals that honor the legacies of Friedberg and Oehme van Sweden, and successfully nest the new memorial within a rehabilitated Pershing Park.” 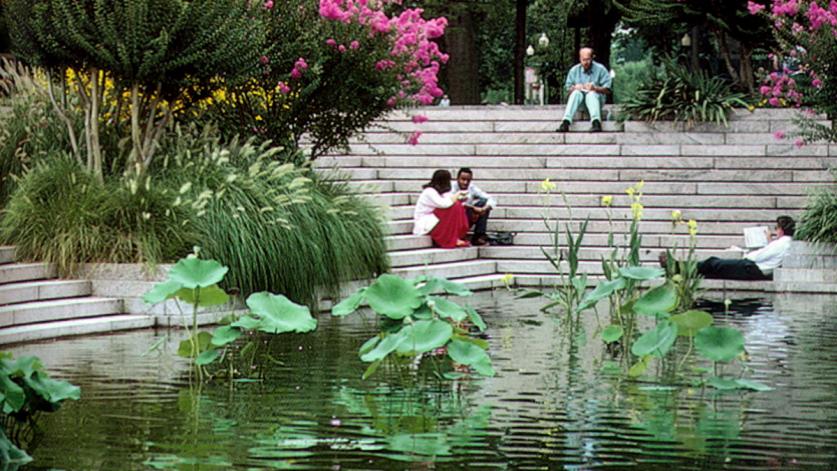 That did not happen, but the WWI Memorial Commission and its consultants would have you believe otherwise. A winning design was announced in January 2016, and there have been subsequent iterations. Unfortunately, the proposals would destroy major elements that define the park, most notably the waterfall/fountain and large rectangular pool of water that: provide an oasis amidst the multiple lanes of vehicular traffic that surround the park; has a cooling effect (from the mixing of air and water resulting during evaporation); and serves as a place of respite in the center of the city, offering opportunities for recollection, contemplation and remembrance.

Why should we care? The answer involves some context. Over the course of his long career, the award-winning Friedberg has designed hundreds of projects throughout the U.S. and internationally – of those, four are acknowledged as seminal works. The first is the plaza at Jacob Riis Houses in New York City, a work that landed Friedberg in LIFE magazine and was funded by Brooke Astor – without any debate it was demolished in 2000. The remaining three significant projects are Battery Park City in New York, Peavey Plaza in Minneapolis, which was listed in the National Register of Historic Places in 2013, and Pershing Park, which was determined eligible for listing in the National Register in July 2016. 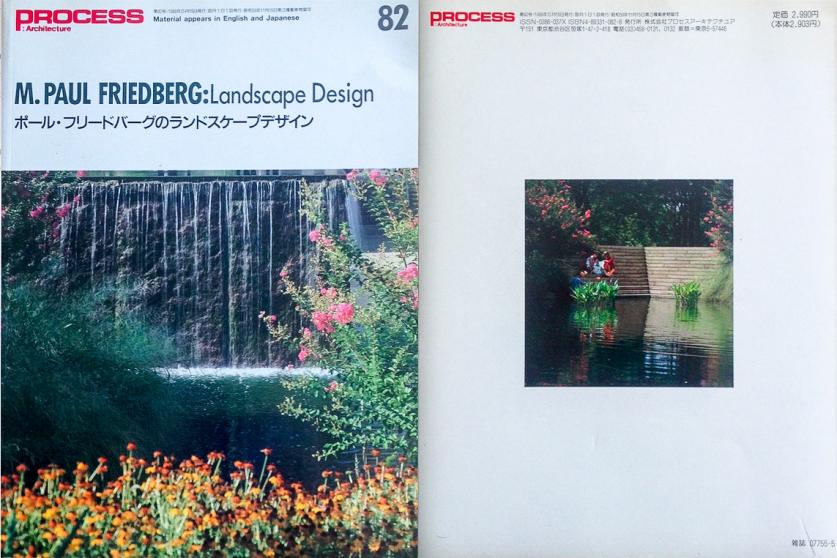 Process Architecture, the internationally influential, Japan-based design journal, has the most comprehensive summary of Friedberg’s body of work (Process 82, published May 1989, features Pershing Park on its front and back covers). It states that Pershing Park “was meant to be the activity center for the avenue.” William “Holly” Whyte, the celebrated urban theorist and critic, notes in his introductory essay: “Friedberg’s designs are full of overtly useful features. Pershing Park in Washington is a virtual compendium of them . . . The carrying capacity of the park is very high – even in summer. Washington’s dreadful Augusts might temper usage, to be sure, but the design does everything possible to make you think otherwise. What with the water, the plantings of the canopy of foliage overhead the place looks cool, even when it isn’t.” Whyte continues, “His water features, for example, are composed to draw people into it, to splash their hands in it, to dangle their feet.”

I recently reached out to Friedberg and shared with him the WWI Commission’s most recent two proposals – the “Scrim and Green” concept, endorsed by the Commission, and the “Pool and Plaza” concept that was not been shared with Commission members. Both concepts call for the elimination of the waterfall and either eliminate or circumscribe the pool; and both introduce a 75-foot-long bronze bas-relief sculpture. 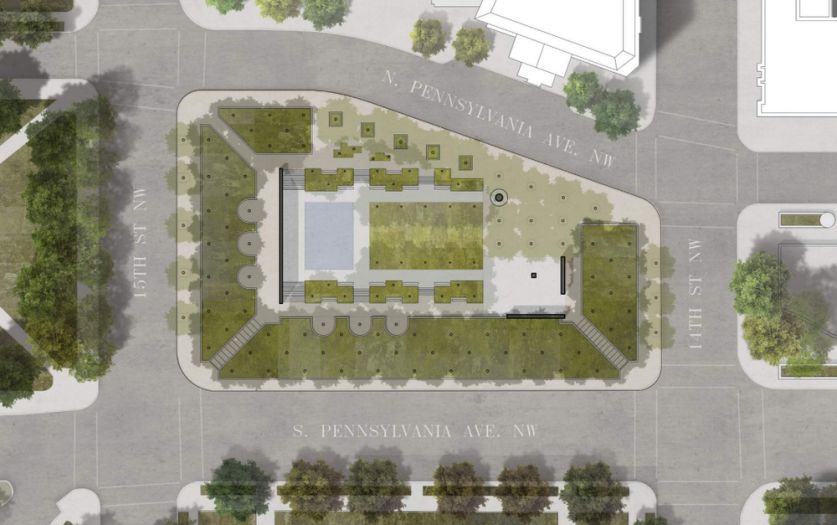 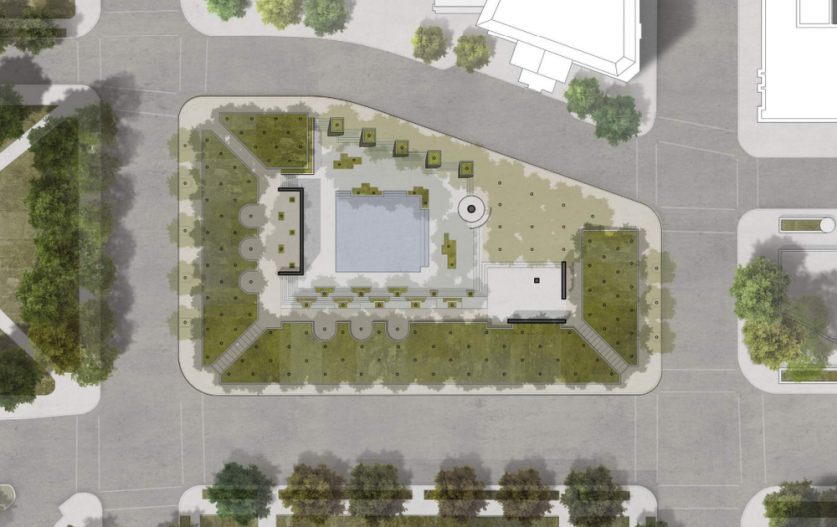 After noting that he has never been consulted about the current efforts, he responded in writing on February 12. He began by stating: “I have tried to stay out of the assessment of the competition as my comments would be misinterpreted as self-serving.” He noted: “The design represented does not build on what was positive and successful. It is an accumulation of pieces — with no apparent relationship to each other. It appears to be an accumulation of disparate elements to satisfy an authority. An example of this is in the use of water. It is present, however what [is proposed] appears to be obligatory, a static stand-alone element. There is no attempt to employ the range and character of water — sound, reflection, movement, focal point and symbolism.” In Pershing Park, the water’s edge “is where the topography came to rest as did the viewer.” 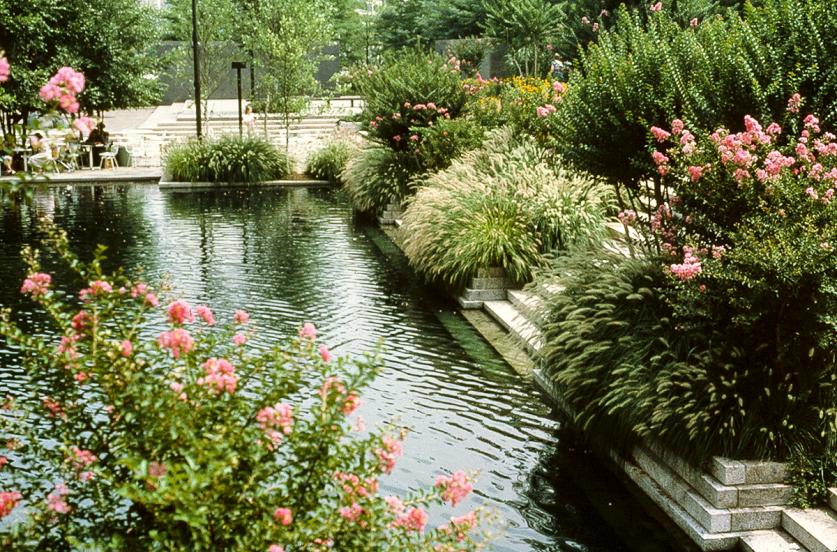 As noted above, Pershing Park is also part of the broader Pennsylvania Avenue National Historic Site, so radical alterations to Pershing could negatively impact the Historic Site, which encompasses a collection of modernist and post-modernist parks commissioned by the Pennsylvania Avenue Development Corporation (PADC) and designed by Dan Kiley, Hideo Sasaki, Robert Venturi, Denise Scott Brown, George Patton, Carol Johnson, Wolfgang Oehme and James van Sweden. While this body of work was built less than fifty years ago, its significance in landscape architecture and community development has been confirmed by substantial scholarly evaluation. As a result the avenue is exceptionally important, with Pershing Park arguably the most significant extant design in the collection. 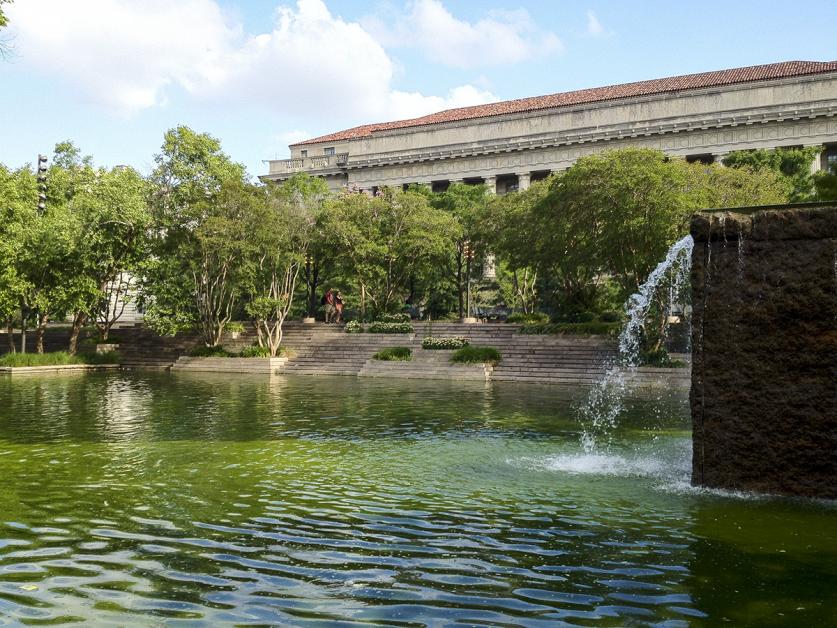 Two agencies must approve changes to Pershing: the Commission of Fine Arts (CFA) and the National Capital Planning Commission (NCPC). CFA members were presented with the “Scrim and Green” and “Pool and Plaza” concepts on February 16. The CFA members praised the design consultants for the thoroughness of their analysis, but rather than vote on the proposals – which they all but indicated would be a rejection – they suggested the designers take a more surgical approach to inserting commemorative elements in the park. The CFA members specifically referenced the significance of the waterfall and pool Pershing’s design, and concerns about how a radical alteration could negatively impact the broader Historic Site. 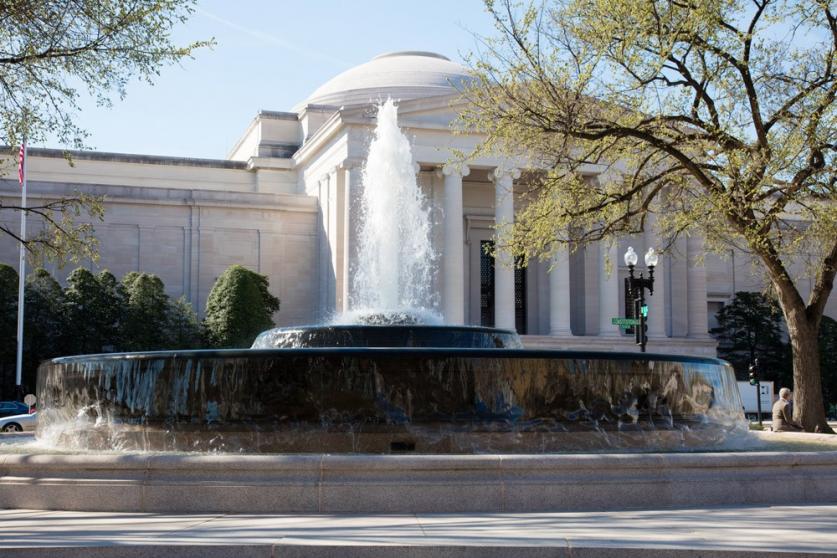 A source of inspiration can be found elsewhere on Pennsylvania Avenue at another park with a fountain that was, until recently, also neglected and dry. Fortunately, the remedy was not radical alteration. Last year following the first phase of Mellon Park’s rehabilitation, Washington Post art and architecture critic Philip Kennicott reported in the March 17, 2016 article, One of D.C.’s great fountains comes back to life, but it shouldn’t have taken so long, that National Gallery Director Earl A. “Rusty” Powell III stated, “We asked for it because the National Park Service didn’t want it.” Kennicott wrote, “The Park Service doesn’t put it so bluntly, but representatives admit that they didn’t have the funds for its upkeep, part of a larger budget problem so acute that it will affect the future look of the District.” Should such budgetary challenges dictate the quality and richness of our shared civic heritage? Of Mellon Park, Mr. Powell observed at the opening ceremony, “People driving by just forgot that there was a fountain there.”

Pershing Park has been neglected, and it’s waterfall and pool, now dry, have been forgotten. But the site’s integrity and bone structure remain. During the CFA meeting, Commission member Toni Griffin noted that the design approach thus far had been one of trying to get the to accommodate a memorial and that perhaps more exploration should be embraced on how to put a memorial into a historically significant park (this was echoed in the CFA’s subsequent official written remarks). Griffin suggested the designers might also engage Friedberg in the process, which Friedberg has said he would welcome. Let’s hope the designers take these recommendations to heart.

This article originally appeared on the Huffington Post on February 27, 2017.