The plaza at 140 Broadway was designed in the early 1960s as an example of the Corbusian “tower in the park.” Isamu Noguchi’s Red Cube seems to defy gravity in the open plaza, which acts as an expansive plinth for the iconic sculpture, creating an aesthetically pleasing space that draws tourists and New Yorkers alike. Recent plans to redesign the plaza include a large, circular planter that would visually compete with Noguchi’s sculpture, which was meant to be the singular, dominant element in the space.

Encompassing one square block in Lower Manhattan, this plaza and tower two blocks east of the World Trade Center were designed between 1960 and 1964 by Skidmore, Owings & Merrill. The project was under the direction of Gordon Bunshaft, the firm’s chief architect. It is an open plaza surrounding a 51-story skyscraper with a shell comprising a matte-black-aluminum frame and glass. One of the first projects to conform to the 1961 Zoning Resolution that incentivized developers to incorporate public plazas into their office-building plans, the tower has a trapezoidal footprint that covers approximately 40 percent of the property, with the remainder of the block designated as privately owned public space (POPS). 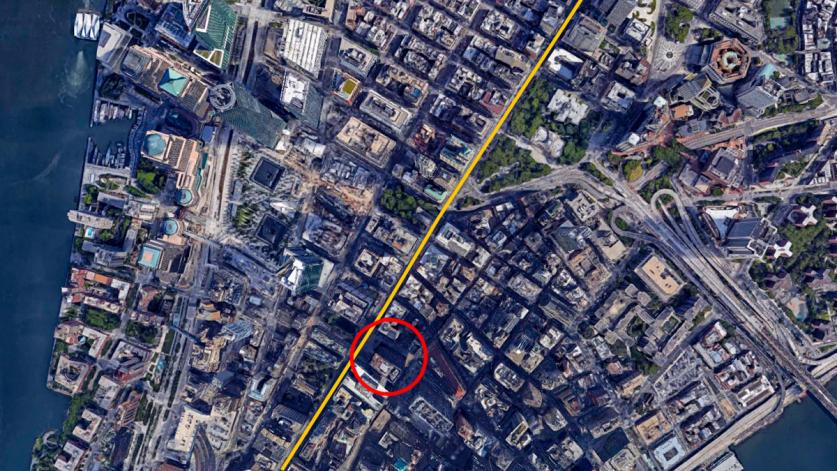 Map of 140 Broadway location; the red circle indicates the site and the yellow line is Broadway. The 9/11 Memorial is visible at upper left.

The building is surrounded on three sides by a 25- to 30-foot-wide sidewalk. This becomes an 80-foot-wide, open plaza on the side of the building facing Broadway and, across it, Zuccotti Park. The plaza was designed as a simple, stark plane of travertine pavers, with few furnishings. The one major interruption to the ground plane is the Red Cube, a steel-and-aluminum vermillion sculpture by Japanese-American artist Isamu Noguchi. Installed in 1968 on what became, in essence, an expansive travertine plinth, the 28-foot-tall sculpture teeters on one edge—an effect that John Russell, in the Sunday Times (London), called “equilibrium made visible.” A circular hole punctures the center of the cube on its west face, inviting passersby to look through it to the tower above. The western perimeter of the site was designed to be devoid of trees or other plantings, allowing the Red Cube to be the singular visual element in an expanse of open space. A 1978 exhibition catalog (Noguchi’s Imaginary Landscapes) described it as “serenely dominating the plaza.” 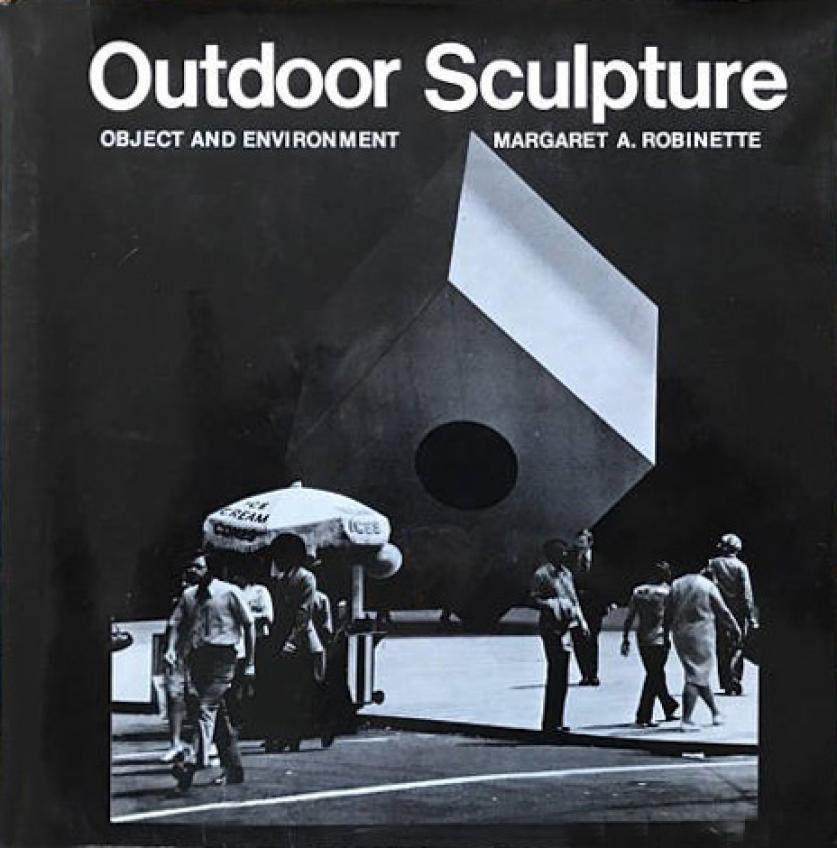 Cover of "Outdoor Sculpture: Object and Environment" by Margaret A. Robinette

Over time, the integrity of the setting for Noguchi's Red Cube has diminished. In 2000 alterations were made along Cedar Street, including the addition of black granite benches, four raised, linear granite planters, and granite paving. The linear planters replaced five round planters in the original design. A black granite slab with gold lettering in memory of real estate mogul Harry B. Helmsley was added near the southwest corner of the plaza. Citibike racks were installed along Liberty Street in 2013, the same year that the building was designated a New York City Landmark.

Noguchi made several large-scale sculptures for buildings by Skidmore, Owings & Merrill, often collaborating with Bunshaft. These include the interior courtyards and garden at the Connecticut General Life Insurance Company in Bloomfield, Connecticut (1956-1957); the plaza for the First National City Bank Building in Fort Worth, Texas (1960); the sculpture garden at the Beinecke Rare Book and Manuscript Library at Yale University in New Haven, Connecticut (1960-1964); and two rectangular courtyards for the IBM Corporation Headquarters in Armonk, New York (1961-1964). Less than two blocks to the east of the 140 Broadway site, Noguchi created a sunken garden at Chase Manhattan Bank (1961-1964), also working with Bunshaft.

On January 22, 2018, the Tribeca Trib reported that the owners of the Brown Brothers Harriman building and its plaza are asking the Landmarks Preservation Commission (LPC) to approve the renovation and redesign of the plaza. The proposal includes removing elements added after the original mid-1960s design, including the four raised, linear planting boxes that run along Cedar Street and the large plaque to Harry B. Helmsley near the corner of Cedar and Broadway (both added in 2000). Replacing the former would be six new circular planters with engaged seating (larger than those of the original design), along with eight light bollards.

The owners of the plaza are also separately submitting a request to the city’s Department of Transportation to install four rectangular black planters and five benches on the public sidewalk along Broadway (not subject to LPC review)—a request that seeks, in part, to prohibit a line of food-vending trucks from forming there. At a monthly meeting of Community Board 1 on January 23, 2018, a representative from The Street Vendor Project and one of the vendors who sells food along the plaza spoke against the plan to install street furniture on Department of Transportation property. The Board then decided to oppose the installation of street furniture in the owners' proposal before the Landmarks Commission. 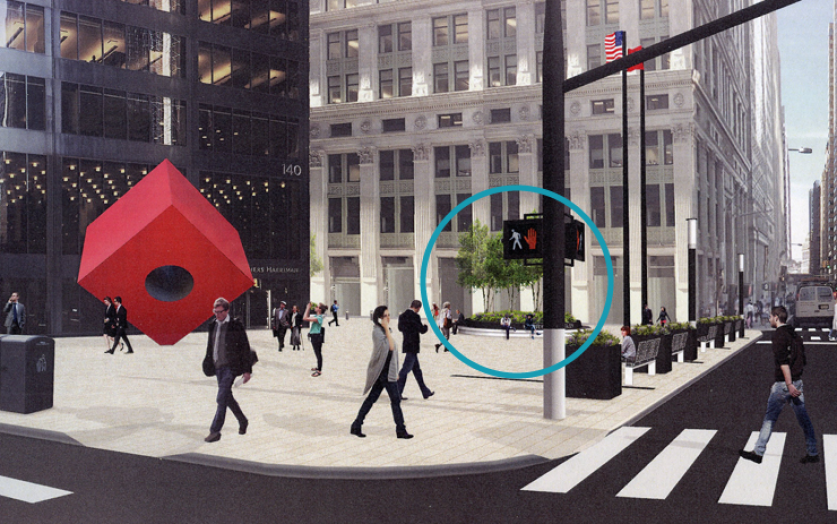 Rendering of the proposed redesign; the blue circle indicates the new circular planter that will change the compositional balance of the plaza.

The Board did, however, approve the redesign of the plaza, which would also replace the Helmsley plaque near the southwest corner of the site with a raised, circular planting bed, fourteen feet in diameter, with an engaged seating ledge inscribed with the name Harry B. Helmsley. Three trees would be planted within the new circular feature. A rendering of the proposal shows clearly that the large new planter and its trees would visually rebalance the site, negating the Red Cube as the singular, dominant element in the plaza. Doing so would adversely affect the experience of Noguchi’s sculpture, the building, and the plaza, which are compositionally intertwined, as the artist himself said in 1968: "…a sculptor is not merely a decorator of buildings but a serious collaborator with the architect in the creation of significant space and of significant shapes which define this space." Arthur Drexler, director of the Department of Architecture and Design at the Museum of Modern Art, agreed with that sentiment:

Together the three elements—building, paving, cube—are somehow more than they seem to be, as if the composition had been created by a sculptor of the minimal school intent on transposing the empiricism of architecture into the metaphysics of abstract form.

Another notable commentator was famed critic Ada Louise Huxtable, who called the plaza a “demonstration of New York at its physical best.” Writing about the project on March 31, 1968, she added:

Space is meaningless without scale, containment, boundaries and direction.The fabled massing of the Wall Street skyscrapers has been given masterful urban definition by the architects’ ordering of these few blocks of new construction. It has been done by concerned, coordinated effort. This is planning. It is the opposite of non-planning, or the normal pattern of New York development. See and savor it now, before it is carelessly disposed of.

Bunshaft’s biographer Carol Krinsky wrote: “This is probably Noguchi’s most popular work of art done in conjunction with architecture, partly because it requires no interpretation. It is a teasingly precarious-looking object for a sober building.” The 2013 designation of 140 Broadway by the Landmarks Preservation Commission also recognized the important relationship between the sculpture and its surroundings:

…rather than place the sculpture in the center of the Broadway plaza, as a Beaux Arts architect might have done, it was installed asymmetrically, to the left, increasing one’s awareness of the surrounding void. Furthermore, by employing a strong color, Noguchi created an additional counterpoint to the dark surface of 140 Broadway and the older buildings that flank it. 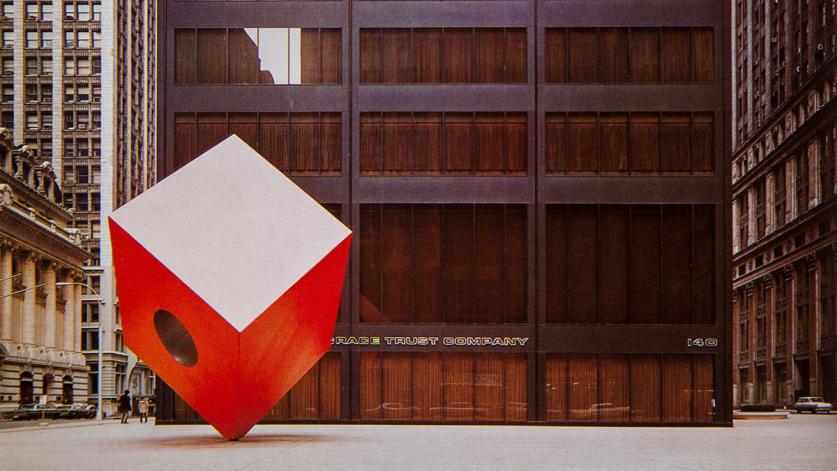 How You Can Help:

The LPC will review the proposal to renovate the plaza on Tuesday, February 6, at 9:30 a.m. The meeting will take place at 1 Centre Street, Municipal Building, 9th floor. Interested parties can provide testimony at the meeting and can also write to Chair Meenakshi Srinivasan at the LPC. Written testimony may be submitted digitally in advance of the meeting via the LPC's online portal by 4:00 p.m. on Monday, February 5, 2018.

A letter submitted by The Cultural Landscape Foundation to the LPC can be read here.

UPDATE: The proposal for the redesign of the plaza at 140 Broadway was pulled from the LPC docket for February 6. The proposal has been rescheduled for a meeting of the LPC on March 6, 2018. 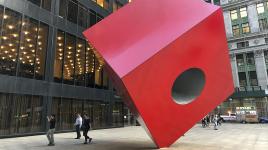 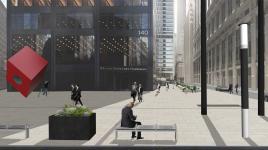 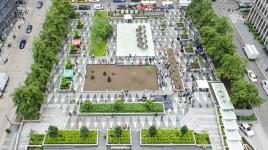 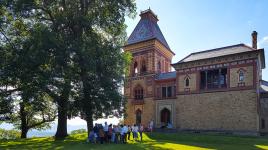